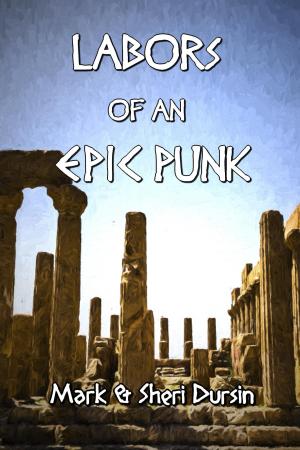 Even heroes need to survive adolescence…

Mac is an epic punk. No wonder: after his dad went off to fight in the Trojan War and never came back, Mac spent his childhood evading his mom’s scum-bag suitors…all one-hundred-and-eight of them. Of course, he turned out this way—a moody, friendless sixteen-year-old who blows off work, alienates everyone at school, and pulls pranks. But when he trains a flock of birds to defecate on the headmaster, Mac (short for Telemachus) goes too far. The administrators give him an ultimatum: prove that he’s truly the son of Odysseus by doing something heroic—or get out.

A school story that just so happens to take place 3,000 years ago, Labors of an Epic Punk is a tale of friendship and transformation, regret and redemption, and a reminder to us all that navigating the rough seas of high school can be just as scary as facing the Minotaur.

Buy LABORS OF AN EPIC PUNK at Amazon or Barnes & Noble, or order it from your favorite independent bookstore!

(And yes: even this bio is a collaborative effort!)